The better part of me

I PLAY this with a pick and a extensive right-hand damping. It's very rhythmic and syncopated, with the emphasis on beats 1 and "2-and-a-half" of each bar. The tuning and simple chord shapes allow the left hand to do a lot of hammer-ons and pull-offs.

The guitar break is based on the basic chords with a few passing notes thrown in. Didn't really know what to call that final chord in the outro (D high) - just see the blobs on the chord shape and note it's at the 10th fret.

MY GREAT great grandfather, Lewis Wilcock, was the son of Thomas Wilcock, the farmer who's the subject of the song "Farewell to the plough". He was born in 1817. I don't know exactly how he wound up in Bolton by 1841 but in that year he married Jane Hart who'd been born in Rivington, so there were clearly still ties with the family's origins.

Lewis was a carter and this song imagines him proposing to Jane, able to offer her nothing more than his loyalty and the continuation of their families. They had two daughters and a son, the latter born in 1847 and a few months later Lewis died. Jane remarried, had 3 further children, was widowed again within a couple of years and lived for another 40 years. 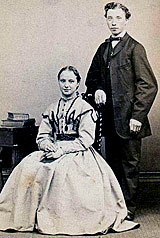 I don't have a photo of Lewis and Jane (not surprising, given the date of their marriage) but above is their son John Wilcock with his wife Jane Holt (my great grandparents).

If your favourite song isn't in here yet, please contact Clive and he'll add it as soon as possible.